What do you look for in music course?

on February 21, 2015
Playing music is definetely a fun & healthy thing to do. Beside bringing positive personal values such as : improving imagination - creativity and artistic senses, memory, focus, split focus, motoric responses & other brainy abilities, self-discipline, sensitivity, etc; it also trains the musician to be able to work in a team (in ensemble/group set-up).

In social context, playing music contributes happiness for people. There's a "feeling good" hormone that's stimulated by listening to music. This works for both sides, the musicians & the listeners.

It also opens up possibilty to be professional when the player's obtained consistence in his/her musical skill. It's definetely a good payed-off satisfaction to be able to master the music he/she's been learning - practicing in long hours and perform it professionally. 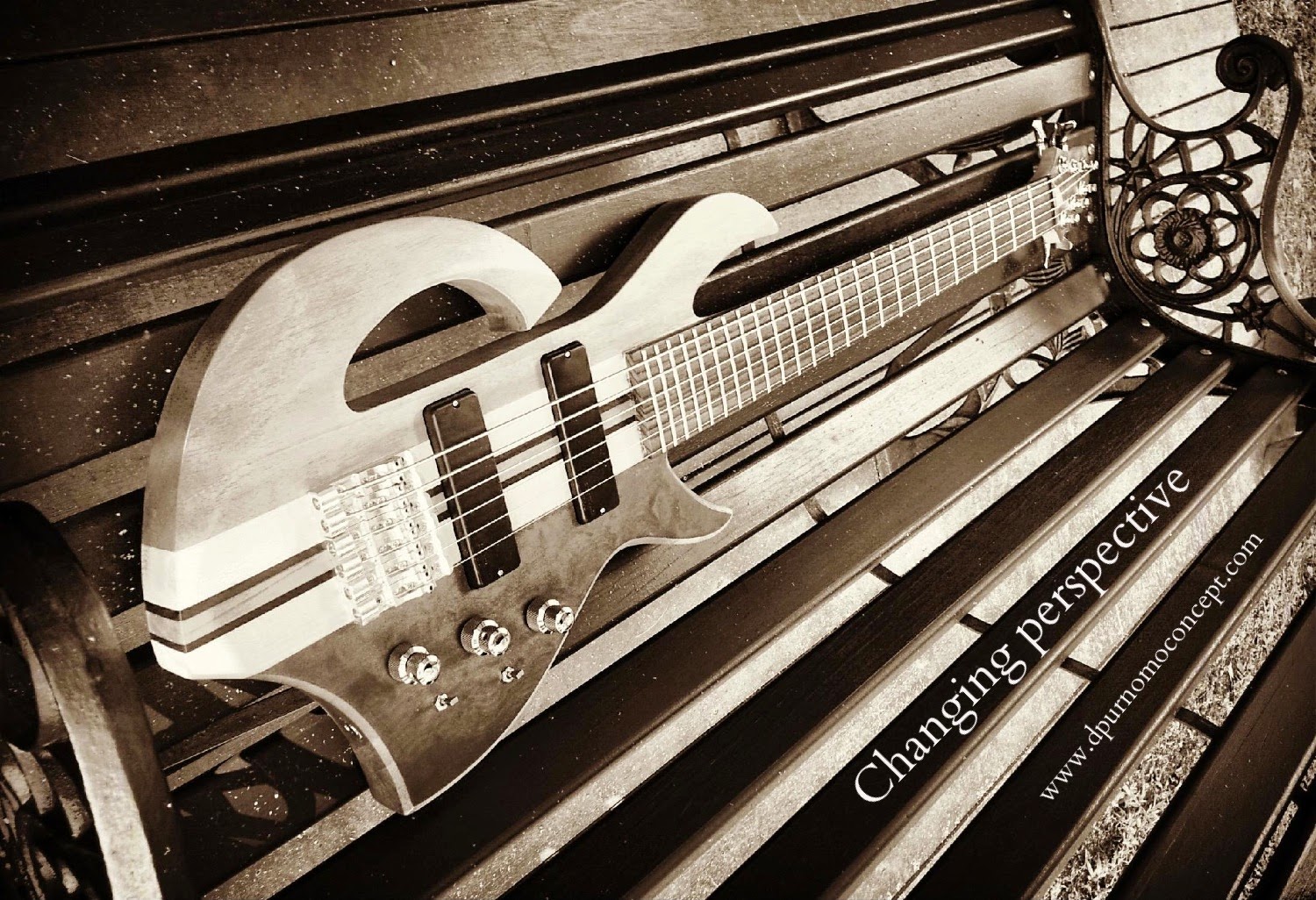 When it comes to learning music, people tend to think about how much it costs per hour lesson rather than the effectiveness of the whole learning process. There are some cases in which music students who have been learning for quite sometimes but still don't show good musical results. In the other hand some other students show good results after some period of learning. In this case the 2nd example works more effective in achieving the goal.

I'm not saying that expensive cost guaranted the learning's efectiveness, or cheaper cost means lousy learning process...it's not always the case, but it's just to remind ouselves about the essensial intention of learning music...its to save the cost or it's to be able to play the music. Saving the time by getting better way's a good consideration, so the student can explore more things.

Here's some analogy : taking a taxi ride's relatively cheaper than aeroplane. When we're going to China by taking cab from Singapore, first, going to Malaysia, then changing cabs in the cities there to go Thailand, then taking cabs in the cities of Thailand, and so on...compare to taking a flight directly from Singapore to China, which one's more effective? After all the cab fare accumulation won't be that cheap, also it's such a long journey.

When a student enrolled to the famous music institution, the one who significantly contribute directly to his/her personal growth's actually is the teacher. He/she's the one who personally interacts with the students, feeds, monitors, corrects the students according to the wisdom he/she has.

I remember my inspiring Classical teacher once told me, "If a 'talented' student learn the guitar & becomes a good guitarist, then it's not because a good teacher. But a good teacher can make 'not so talented' student become a great guitarist." That's such a remarkable statement! It needs enlightment (practical wisdom) for the teacher to bring out the hidden treasure from the student. 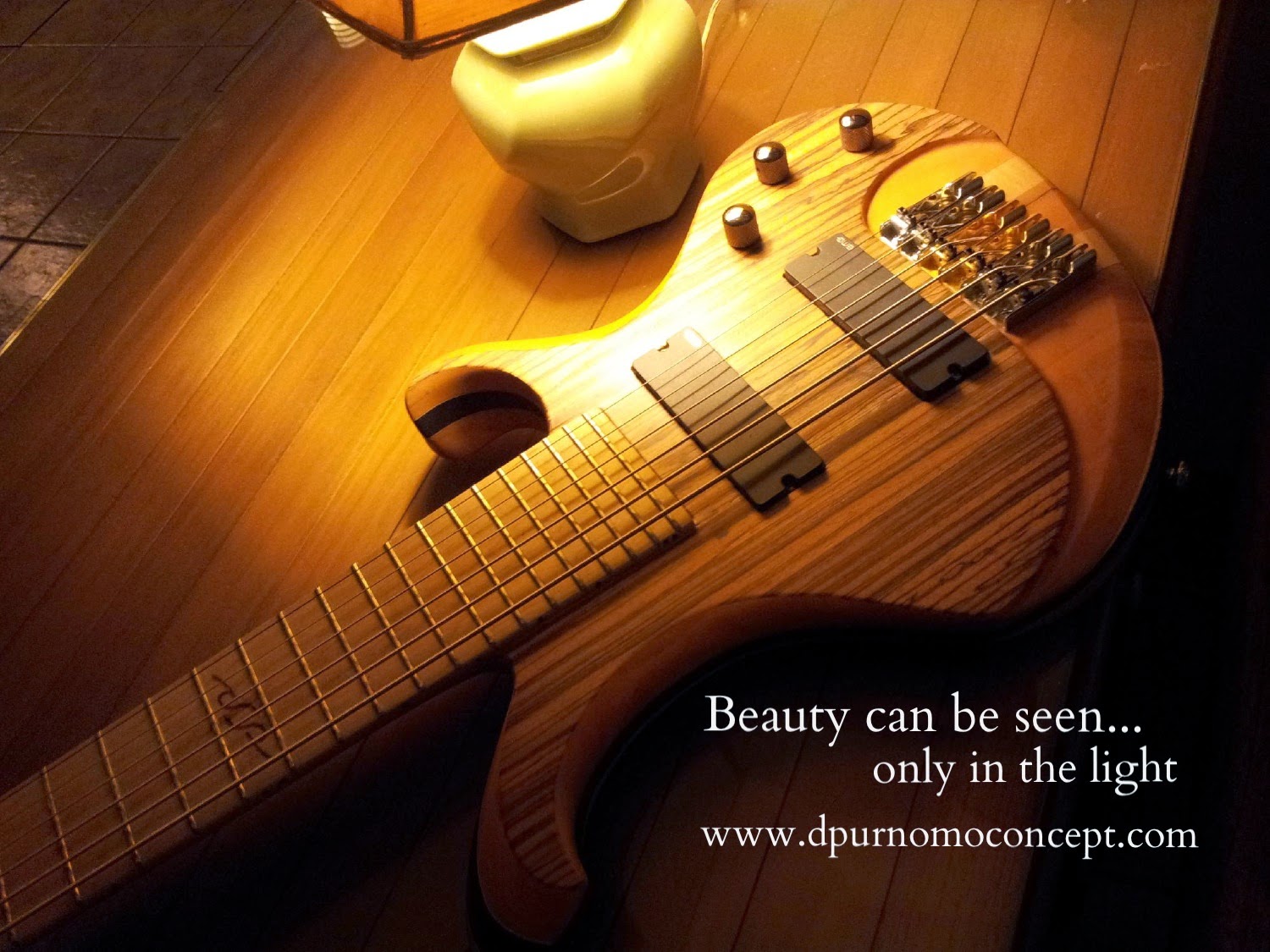 During my early years learning guitar, I unconsiously encountered a lot of technical difficulties in learning guitar. Once my saxophonist friend told me that he liked my solo fingerstyle work, but he found that there's unnecessary dirty "clicking" sound in my playing. That shocked me...but yet I didn't hear any "clicking" sound he meant (though I'd been trying very hard to perceive it). "Hmmmm...maybe something's wrong with his perception" - at least I thought so at that time.

Years after (I forgot how long), I met my Classical teacher. With his good analitycal skill my he told me that my top side right hand fingernail touched the other string after I plucked a desired string, hence the "clicking" sound appeared. Straight away I remember what my friend's told me about this case - and the funny thing, at that moment I heard that "clicking" sound very loudly in which I was never conscious about.

My teacher then, corrected my finger's position and told me how to practice in better way to avoid that dirty plucking sound. I've learnt in music that sometimes it's not about how hard we practice...but also how we practice. If we've been practicing with wrong way, it'll take time for us to unlearn these things & take up a new correct way of practice.

It's just an example about fundamental thing that I needed to substitute with the correct habbits. There're many other bad habits I unconsiously had at that time, such as : my left thumb was too strong in sticking behind the guitar neck, so the friction slowing down my left hand when I needed to move my position around; this affects the whole playing system, I couldn't run the notes well too, my plucking right hand also affected (there's a connection between left hand & right hand in which we need to train both to be independent); my right hand pinky unconsiously tent to stick out so high & pulling up the rest of the fingers so I couldn't pluck comfortably, and other bad habits.

Thank God for my self-mistakes actually, so now I know how to solve them when I encounter them in my students. Imagine if I didn't have bad habits, very smooth learner, my solution would have always been "practice harder" to my students. As everybody's unique, I handle the issue of each student personally, I'll create a customized practice for that particular student to overcome the problem to enable him/her to achieve greater result.

Beside "effortless/non-straining" skills, the knowledge about musical language's also important. A lot of people learning guitar based on memory only (memorizing chords shape) without adequate information/knowledge about the "why". Understanding the musical knowledge's very important to build up musicianship, just like "grammar" to English. Knowing how music works (the logic) makes the learning so much exciting & yet easier rather than just memorizing things without knowing the reason/connection.

Of course the step doesn't stop just at the knowing, at the same time I'll give practical application to make the students apply the knowledge. This "hands-on" based program makes the students "feel" & "perceive" the music (how it grooves, what's good melody, what's smart chord progression, etc) better.

I also give practical guitar tricks that straight away can be applied by the students (depends on their ability level too). The video below's some trick to combine strumming pattern & bass pattern (up-down thumb) in which it sounds like 2 persons playing.

I had a Singaporean student with engineering field back ground (same as me too) who already knows how to play a piano. He's inspired to learn fingerstyle guitar as he got to know that actually a guitar can be played as orchestral instrument too (melody, harmony, bass line). He improved so much from  day 1 to less than a year (about a year learning), from knowing nothing about guitar to becoming a profesional singer-guitarist in Adelaide Australia, it's a very big jump. I'm not saying that once we learn music we've got to quit job & become musicians...I'm just saying that learning music the right way can make you "jump so far". 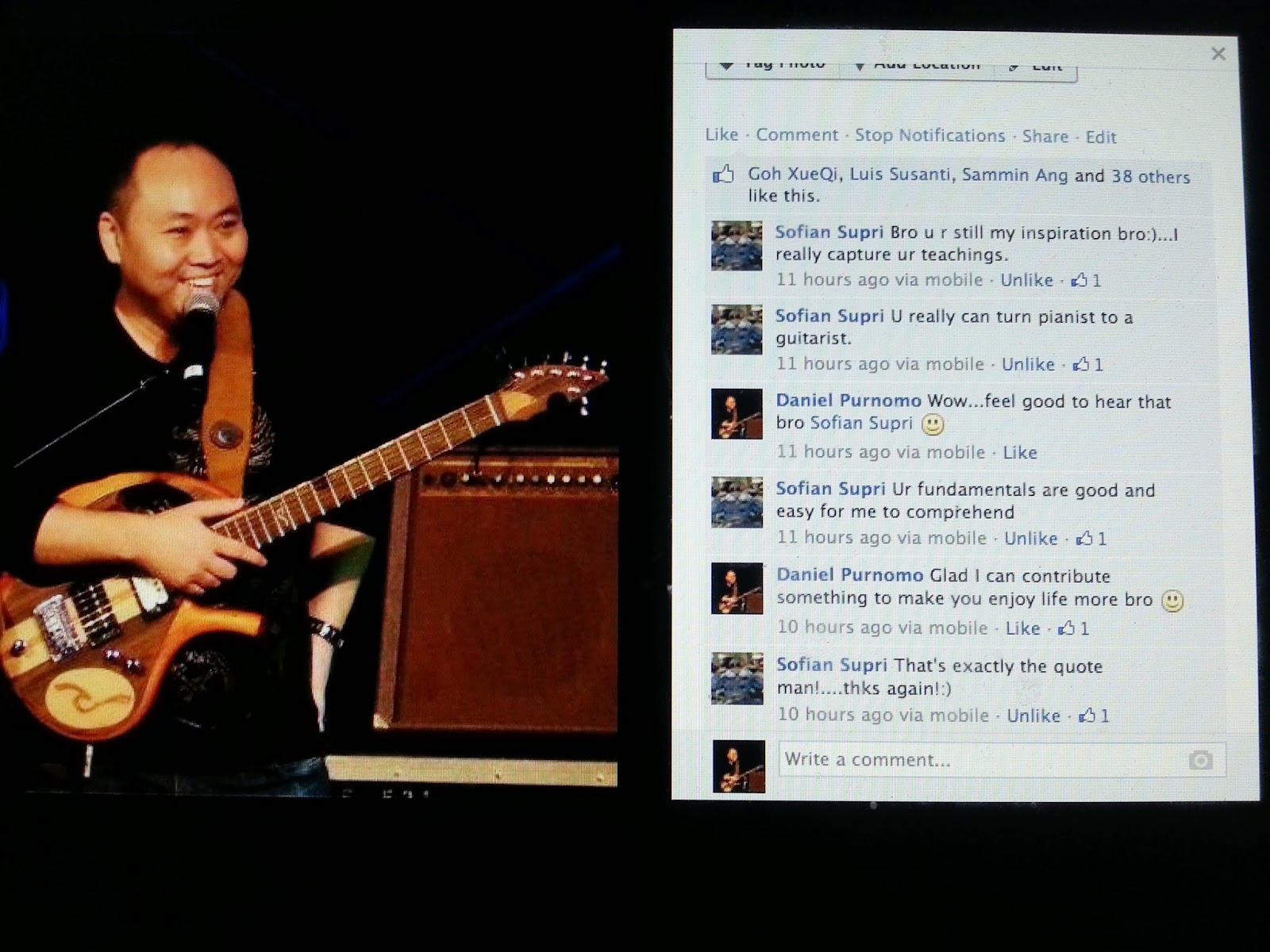 Despite the musical passion, some people excuse themselve in learning guitar thinking that they're tone deaf, out of the rhythm, etc. The fact that they can enjoy the music (that's how the passion comes) actually shows that they are not totally tone deaf. When I was in secondary school, I thought I was singing the harmony when I sang together with other friends...but all my friends laughed at me & told me that I was so out of tune.

I also once had a student that couldn't even feel the beat. Could you imagine if there's a dancer move in different rhythm with the music? But I managed to solve the problem by training him just to clap to the music first. I just needed to make him aware of the thing he wasn't aware of. Changing perspective's very useful in helping student to see from different angle as not everybody has the same angle to see.

It's also good to explain and showcasing clearly the material and make the student do it him/her-self.

As well as teaching guitar, it's quite a skill of art too in teaching song-writing, arrangement, ukulele, bass, jazz theory-practical, touchstyle guitar, ensemble, etc.

Don't feel that you don't have talent. You might take more time in developing some area in music, but in other area in music you might be faster than the rest. Most importantly, enjoy the journey...by that you can find motivation that makes you progress. 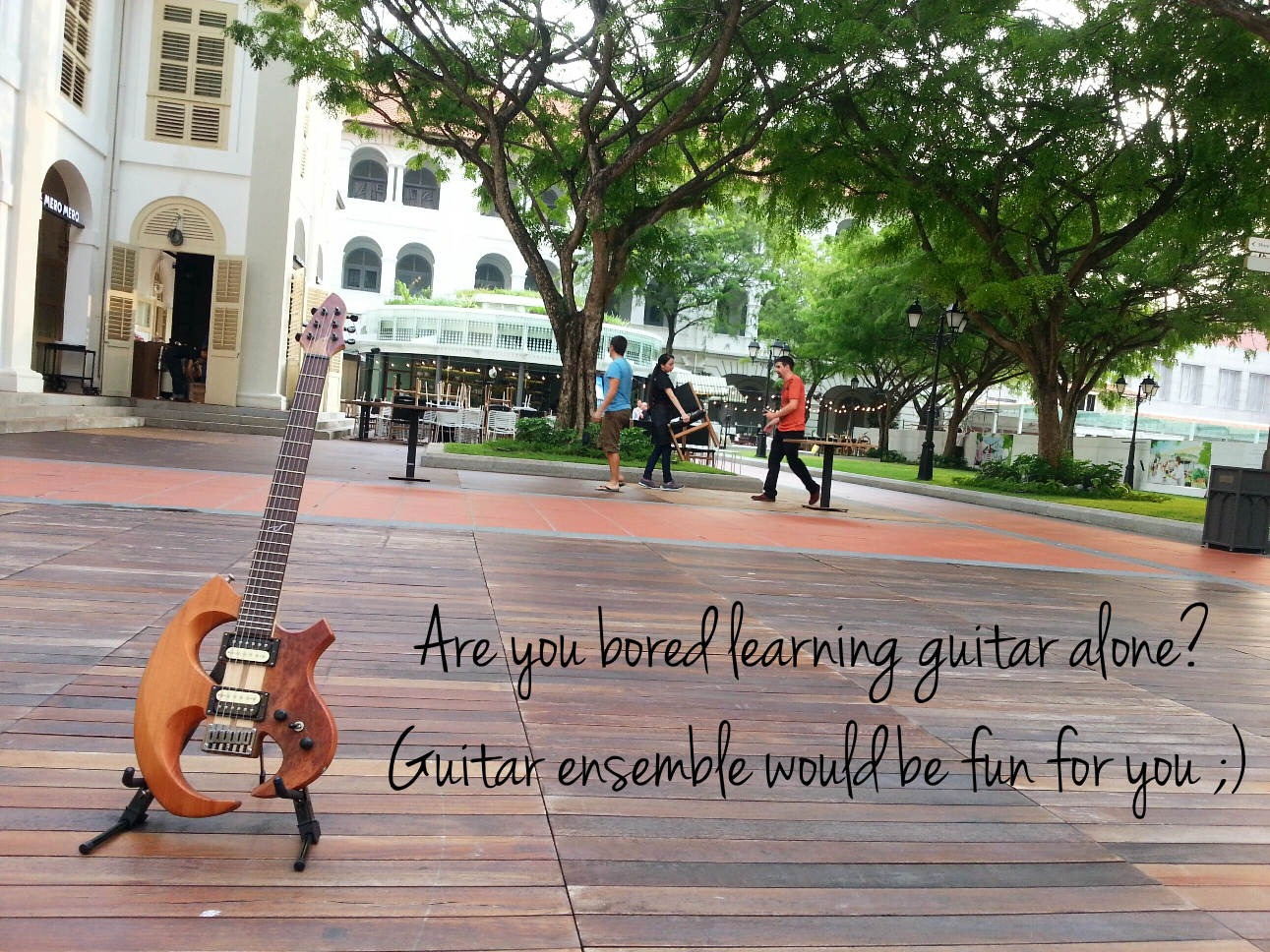 We know that music's fun, but somehow it's very difficult when it comes into learning it. Somehow people find it difficult to get self-motivation to commit in learning.  The good thing about learning the guitar, you can learn in together with others. Ensemble's a good way to start the learning process. There are different parts that need to be played in harmony & in the same tempo.  It's a great practice to build up teamwork as everybody need to express, yet at the same time to listen to each other. Ones need to control & contribute their playing to the team by perceiving their environment - what other members are doing - being aware of the accent, the dynamic (when to play loud - when to play soft), the groove, the timing, tempo, etc.  Beside encouraging each other in learning, it creates strong bondage as everybody supports each other to reach the same vision. It feels good when you know that you're not alone in the learning process. T 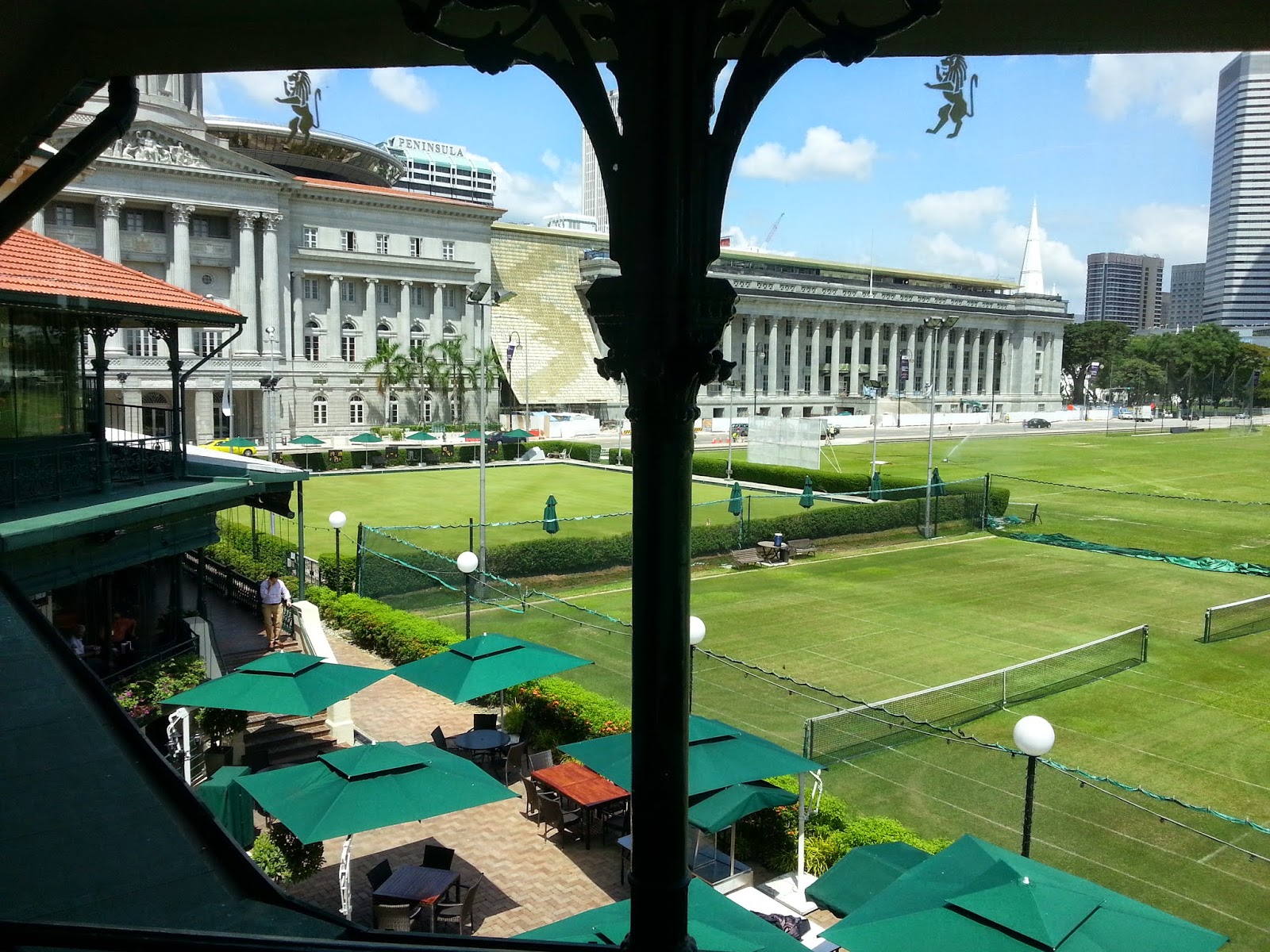 Friday, 16th January 2015, I went to Singapore Cricket as they asked me to perform solo guitar for their lunch time event. I wondered what event would it be on the unusual timing, Friday afternoon. It's unlikely a wedding nor company function as usually afternoon wedding would be on week end & company functions usually would be on weekdays evening. Anyway...it's a great sunny morning I could enjoy there :) I reached at Gilmor Room at Singapore Cricket Club about 11.30am for sound check. There're 4 tables already nicely set-up there. Without initially knew what event would it be, I could guess it's gonna be quite intimate event with only for few people. After getting some information from the friendly staffs there, as well as my "quick" observation by reading the set menu on the table, then I knew that it's one of Singapore Cricket Club's member's birthday, Mr. Tony Richardson would be celebrating his coming birthday there. Th